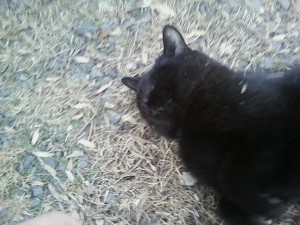 You have a saying, “the early bird gets the worm.”  Two things in rebuttal.  First, really???  You’re admiring birds?!  For shame!  You only admire birds when they’re deep-fried using the Colonel’s special recipe.  Otherwise, they’re carriers of disease, ignorant, and frustratingly airborne.  But delicious.

See how that works?  The more you sleep, the more energy you have conserved for the eight hours you only need to be awake.  Your inefficient sleeping patterns are contributing to your mediocre status in the hierarchy.  I mean, how many hours of “Honey Boo-Boo” must you watch before you might think, “hey, it might be best for me to sleep now, so I can be awake at 4 in the morning to serve ‘Inky’ breakfast and give him unconditional love and homage.  It’s been quite selfish of me to sleep until 7.”  At least then you would be serving the greater good.